Reese Vows to Put Away Clubs

The toughest aspect of Jimmy Reese’s initial season on the FLW Tour in 2015 might be curbing his addiction to golf.

The older brother of Skeet Reese estimates that he was on the links no fewer than 120 times through the first 9 months of this year. That’s an average of more than three rounds per week.

All that time on the fairways and greens produced stellar results: His handicap index is now only a half-stroke over scratch. A quick glance at his Northern California Golf Association member ledger shows he’s posted six rounds in the 60s since late summer, including a sparkling 65.

Two weeks after finishing 23rd in the WON Bass U.S. Open at Nevada’s Lake Mead in September, he captured the Ukiah Golf Club Men’s Championship, stomping both his semifinals and finals opponents by scores of 5 & 3 (the matches concluded on the 15th hole as Reese was five holes ahead with only three to play).

Then his clubs went into the garage and haven’t emerged since. He hasn’t even been back to the course to collect his bounty – a $150 pro shop gift card.

“They probably have mildew on them right now because I’ve been doing what I’m supposed to be doing,” he said. “I’m totally focused on fishing and trying to get dialed in for next year, and it’s a lot of work.

“I don’t do anything (half-heartedly). I know what it takes to win in bass fishing – it takes a total commitment.”

No Illusions of Grandeur

Reese, who was a member of his high school’s golf team and once considered a career as a teaching professional, is fully aware that if he’s going to make a living wage from a competitive endeavor, it’ll be by casting lures rather than smacking dimpled white balls. He recently checked in at No. 10 on veteran writer George Kramer’s ranking of the Top 40 bass anglers in California. On a similar list of the Golden State’s best golfers, he’d be nowhere near that lofty position – likely not even among the Top 1,000.

That’s why he’s joining the FLW Tour rather than waiting a few months until he’s eligible to try to qualify for golf’s Champions circuit (he’ll turn 50 next April). He doubts he’ll play no more than about 20 casual rounds in 2015.

Instead, he’ll take his second crack at tour-level bass competition. Since his lone season on the Bassmaster circuit in 2003, he’s been a dominant force in his home region, capturing back-to-back Western Rayovac Angler of the Year titles (2006-07) and finishing among the Top 10 on that list seven times over the past 8 years. The one year he missed (2009), he fished only one event.

His mother and his twin brother John will operate his janitorial business (which employs 15 people) while he’s on the road next year. Fellow Californian Gary Haraguchi, who’s experienced nearly as much success out west as a co-angler as Reese has enjoyed from the front deck (or on the golf course recently), will travel with him and fish the Tour as a back-seater.

“I’m trying to nail down an itinerary for pre-practice because I want to get to every lake for at least a couple or 3 days prior to the off-limits,” he said. “I don’t know how that’s going to work for Toho (the season opener in Florida) unless I fly out there and find somebody to take me fishing for a few days. 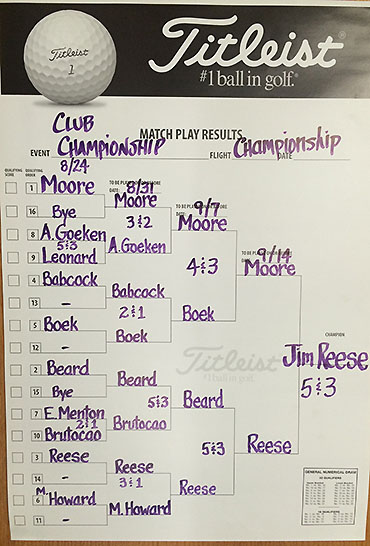 Here’s the bracket from this year’s Ukiah Golf Club Men’s Championship, which Jimmy Reese won by steamrolling his opponents in the semifinals and finals

PHOTO: JIMMY REESE
Here’s the bracket from this year’s Ukiah Golf Club Men’s Championship, which Jimmy Reese won by steamrolling his opponents in the semifinals and finals.

“I want to get acclimated to each one as far as where the boat ramps are, where the tackle stores are and where I’ll have to go to buy a license if I can’t do it online. Then I’ll start doing a lot of idling.”

He has mixed memories from one of the venues – Alabama’s Lake Eufaula. He weighed an 18 1/2-pound bag on day 1 of a Bassmaster event there in ’03 and was in the Top 10 of the standings, then blanked the following day and finished 102nd.

“I caught an 8-10 that first day, but Mark Davis caught an 8-11 and I got no press,” he recalled with a laugh. “Then a monsoon came in and just turned my area upside down.

“That’s one lake I’m a little nervous about.”

Reese said he’ll have fairly high expectations for his initial tour-level season in well over a decade.

“My first goal will be to make a check in every tournament, which would be the Top 60, and then just let everything happen from there,” he said. “Do I want to win a tournament? Yeah, but that kind of just has to happen.

“I want to qualify for the (Forrest Wood) Cup, but I don’t want to fish like that’s all I’m trying to do, if you know what I mean. I want to fish to make the Top 5 in the points.”

He’s fished dozens upon dozens of events over the past 10 years, but hasn’t gone head to head against his brother since the demise of the Bassmaster Western Opens after 2005. He might consider a run at qualifying for the Elite Series at some point down the road, but that’s not on his radar at the moment.

He said he and his brother’s fishing styles are similar, but not identical.

“I think Skeet flips and pitches quite a bit more than I do,” he said. “I’m probably a little more likely to pull out a Senko or a dropshot or a shaky-head.

“I think we’re both very versatile, though. We adapt and do what we have to do to get the job done.”